What Exactly is CBD?

CBD, or Cannabidiol, is one of over 140 medicinal compounds known as Cannabinoids that are found in the cannabis plant. CBD is the most abundant cannabinoid present in cannabis, but there are other minor cannabinoids that play an important role in synergizing the beneficial health effects that cannabis has on the human body.

The minor cannabinoids include CBG (Cannabigerol,) CBC (Cannabichromene,) and CBN (Cannabinol.) It is important to mention here that without the acidic side of CBG, known as CBGA (Cannabigerolic Acid) the cannabis plant would not exist since CBGA is the precursor for the creation of all other cannabinoids in cannabis! In addition to cannabinoids, the cannabis plant also has other compounds related to health benefits called flavonoids and terpenes. Flavonoids are a diverse group of plant chemicals that are responsible for the various colors in fruits and vegetables. Terpenes are plant compounds responsible for giving most plants their smell or essence. They also deter predators and attract pollinators. When combined in a cannabis formula, cannabinoids, flavonoids and terpenes create the “Entourage Effect;” a perceivable therapeutic response once ingested.

What is the Difference Between Hemp and Marijuana?

When describing the difference between marijuana and hemp, we like to say, “they are part of the same tree, but they are different branches.” When Cannabis Sativa L., A.K.A. marijuana, is grown, it is deliberately cultivated to contain copious amounts of THC, the psychoactive substance in marijuana that causes euphoria, or the feeling of being “high.” It is still considered a Schedule I controlled substance and it is illegal in all 50 states unless a state has approved the use of medical or recreational marijuana. On the other hand, when industrial hemp is grown, it contains barely any THC (less than 0.3%, the legal permissible limit,) so it does not cause a person to feel “high.” In fact, the 2018 Hemp Farm Bill uncoupled hemp from marijuana, and made it completely federally legal in all 50 states, because it is now a crop, like soybean, corn, wheat etc… Hemp-derived products can be purchased over the counter (OTC) without a prescription or a note from the doctor.

What is CBD Used For? 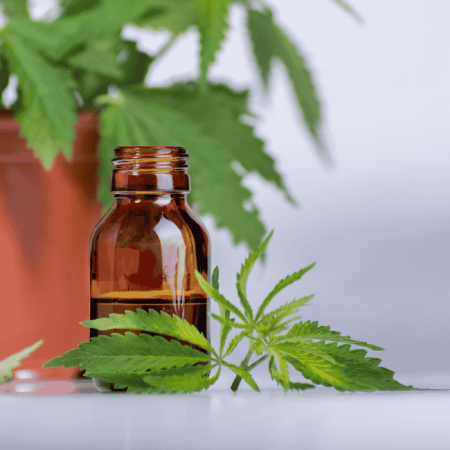 CBD has a multitude of health benefits.

All mammals, anything with a spinal cord, have a network of specialized receptors in the body that sit on the surface of practically every cell throughout the central and peripheral nervous systems. These receptors are known as Cannabinoid 1 (CB1) and Cannabinoid 2 (CB2) receptors, and they make up the Endocannabinoid System.
The receptors are responsible for controlling things like mood, appetite, sex drive, cognition, sleep, energy production, immune response and many other bodily functions. The main job of our endocannabinoid system is to maintain homeostasis or balance in the body as it responds to stimulus from our environment (outside of the body.) When people are suffering from illness or symptoms from different disease states, they may be suffering from Human Endocannabinoid Deficiency Syndrome.
To address these various symptoms, people turn to different forms of hemp-derived products to dial in the relief they need. For people who suffer from acute symptoms of pain or anxiety, PurWell’s Delta-8 vape pen provides almost immediate relief because the vapor crosses the blood-brain barrier within 1-2 minutes, so vaping provides the quickest time to onset.

Since there are many people who do not want to inhale vapor into their lungs, the next fast-acting form of hemp is in Tincture form. Tinctures are administered directly under the tongue, where you hold the hemp oil for at least 1 minute (2 minutes is best) before swallowing, and absorption takes approximately 15-25 minutes. Tinctures are great for more chronic conditions and symptoms like pain/inflammation because each dose can last approximately 3-6 hours in the body longer, providing broader support.
Capsules and gummies will take the longest to enter the bloodstream and activate since they have to go through the digestive process before they kick in. This can take up to 60-90 minutes, so this form of hemp requires a little patience; however, once they do kick in, they can provide the longest range of support, 6-9 hours and sometimes even longer. Neuropathy and osteo/rheumatology type symptoms seem to respond best to gummies or capsules.
If someone is extremely hesitant to try a hemp-derived product for any reason (e.g., perhaps they think it will get them high or they don’t like the taste of the product), then a topical roll-on or salve would be best because they typically do not enter the bloodstream; however, topical solutions are limited to treating a localized area of the body. In other words, wherever you can apply the topical hemp-derived product is where you will feel relief.
With PurWell products, regardless of what form factor you choose, we are very confident that you will notice a perceivable improvement of the symptom(s).

Can You Take Too Much CBD?

The World Health Organization (WHO) has stated that CBD poses no great risk for side effects and is Generally Recognized as Safe (GRAS.) It is generally known that it is pretty much impossible to overdose on CBD, no matter how much a person takes, but there are a couple of drawbacks that immediately come to mind. For starters, taking more CBD than a person needs is wasteful and expensive, and it can be counterproductive in addressing the symptom. Some studies have shown that extremely high doses of CBD do very little to impact a symptom in a positive manner, but mid-range and low doses provide the greatest chance of having a therapeutic response. Another drawback is that when a person overuses CBD, they can begin to feel tired and sluggish, which is great if you want to fall asleep but not so great if you were hoping for a different result. When using a CBD product, it is best to “start low and go slow,” until the desired effects are attained, so approach it the same way you ascend a staircase; by walking up it one step at a time.

What is CBD Oil? 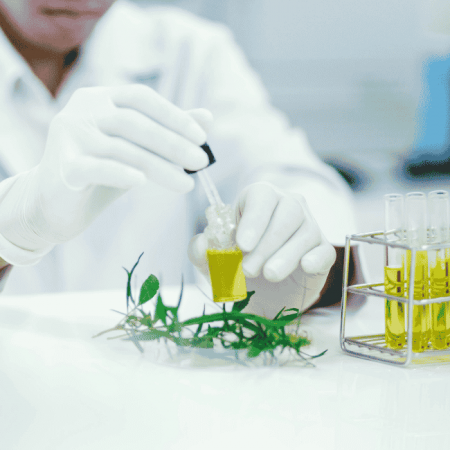 CBD oil is derived from the cannabis plant, either hemp or marijuana. It is extracted from the plant using various methods, but the most common method is either supercritical CO2 extraction or ethanol extraction. Supercritical CO2 extraction uses pressurized carbon dioxide and heat to remove the phytocannabinoids (e.g. CBD, CBN, CBG) and other compounds from the plant. Cold ethanol extraction uses ethanol alcohol typically set at temperatures between – 22 degrees and – 40 degrees Fahrenheit. Cold ethanol extraction is believed to extract the most throughput, or material, from the cannabis plant in a very brief amount of time. Once the oil is extracted, any remaining ethanol is evaporated in a vacuum. CBD oil is typically administered under the tongue, and it takes about 15-25 minutes to enter the bloodstream.

With the rising demand for cannabis products, technologies used for extracts are becoming more and more sophisticated. Legalization has opened the door to many innovative ideas and methods to make different concentrates, and producers are always finding new solvents to get the very best from cannabis. Just as it is true that not all species of Cannabis are created equally, the same holds true for the various extraction methods being implemented to bring Cannabis based solutions into the lives of consumers.

What are the Different Types of Extracts?

As the name says it itself, when you produce solventless cannabis extract you don’t use any chemical solvent. All you need is water, heat, pressure and a sieve.

Are the most common form of concentrates on the market and typically involve propane, butane, CO2 or ethanol to strip cannabinoids and terpenes from the cannabis flower.

The title speaks for itself, BHO is made using butane. Different hydrocarbons (propane, butane, hexane, etc.) have been used since the 1970s for food extractions (e.g., canola and corn oil). The final product can have a different consistency which is responsible for the name of the extract, e.g., wax, shatter, honeycomb, oil, nectar, etc. The solvent is run through the plant matter, which makes the desirable oils come out of the plant. To remove the residual solvent, the solution is heated (butane evaporates in low temperatures) in a vacuum.

RSO is also known as Phoenix Tears. Rick Simpson came up with the production method himself. To make the extract using this method, you need to soak the whole plant in pure naphtha or isopropyl alcohol, which draws out the cannabinoids. After the solvent evaporates, the final extract is like a tar. People usually administer RSO orally or apply it to the skin.

This process doesn’t require any chemical solvents which is also the reason why some people prefer it. The extracts are made using carbon dioxide, which is compressed until it creates supercritical fluid. This oil then strips the essential oils from the cannabis plant in a similar way to the hydrocarbons (BHO, propane, hexane). This method is unique in a way because it uses the supercritical fluid which has the properties of liquid and gas. It enables it to dissolve the plant matter very thoroughly. In comparison to BHO, the CO2 method is easier to control, and the cannabis extract contains more terpenes (up to 10 % compared to BHO which has 0.5–3.5 %). This method requires very expensive equipment which is normally found in professional laboratories. The extract is great for vaping in any kind of vaporizer, including vape pens.

You may have heard of high vacuum and short path distillation. These are just different names for molecular separation. This method enables you to separate the cannabinoids and terpenes from the plant and treat the molecules with minimal thermal degradation. It is because the whole process is performed in vacuum levels below 0.01 mm Hg. It allows the distillation of high boiling point products at moderate temperatures which is beneficial because the plant isn’t exposed to high temperatures for a long time. This means that there is minimal thermal degradation of the desired compounds.

Extracting cannabis with cold ethanol, -20C or lower, has been discovered to pull cannabinoids and terpenes without extracting waxes and chlorophyll.  This effectively eliminates the older refinement techniques of using carbon. This is the PurWell method of extraction which enables us to consistently produce premium, full spectrum CBD products.

Is CBD Oil Good for You?

While more studies need to be done, thus far, the research that is available suggests that there may be several health benefits linked to taking CBD oil. And because CBD oil is non-psychoactive and does not give people the “high” feeling associated with marijuana, it is becoming a popular alternative or adjunct to pain medications. So, people who suffer from acute or chronic pain due to inflammation may benefit from the powerful anti-inflammatory properties associated with CBD. The effect it may also have on a person’s central nervous system makes it a potential aid in reducing symptoms associated with depression or anxiety. CBD has also been shown to possess antiemetic or anti-nausea properties making it effective at treating nausea associated with cancer and chemotherapy. And, due to studies that show CBD may contain neuroprotective properties, it may be effective at addressing symptoms associated with neurodegenerative diseases such as Parkinson’s, Alzheimer’s Multiple Sclerosis, and may be helpful at reducing symptoms of neuropathy associated with diabetes and other nerve conditions. The takeaway here is that CBD oil is nothing new. In fact, civilizations from around the world have been using oil extracted from the cannabis plant to treat common ailments for millennium. We recommend you take your time to find a quality product in the right dose that is backed by third party lab tests before investing money into a hemp-derived product.

Book an appointment and stop by our location to get approved for your Florida medical marijuana card.
Only available on Fridays.